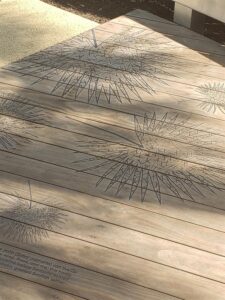 We are pleased to have been part of the team that enabled completion of the Mangrove Walkway portion of The Bay Sarasota that officially opened for public access on April 10. Working with the team at Jon F. Swift Construction sections of the walkway were laid out, cut and numbered. These board sections were bundled and transported to our shop where after matching the provided cad layout we set up, routed, stained and sanded the boards before stacking the sections for their return to the site.

The Bay Sarasota is envisioned as an iconic and aspirational park for all citizens and visitors to Sarasota and the west coast of Florida and now features sections of Kebony planking engraved with elements found in the environment the walkway traverses as well as descriptions of the flora represented as a part of that experience.